To start a Mughal Empire Settlement, select the transportation ship and you will be brought to the Settlement screen. Choose the Settlement by scrolling up/down on the left to the desired one and select "Start".

The same ole theme is present as you will be cycling between producing Rupees which is the settlment Supplies/Currency/Coin in order to set up a Goods producing cycle. This guide assumes you get the gist and will try to provide some pointers unique to this settlement.

You get the awesome Mughal Temple, Emmissaries and depending on how quickly you finish it, fragments for a Minaret. As usual, each successful completion will decrease the time alloted for completing the Settlement; however, the Bonus Multiplier will increase and that will hopefully help for successful completion. You can find more information about rewards, Emissaries and time limits here.

Unfortunately, housing is the only way to obtain Settlement Supply/Currency (Rupees) until the 4th Technology (Chhatri) can be unlocked so obtaining this technology is the first priority. This makes for a very slow first few days as you attempt to balance Coin/Goods collection for optimal timing.

Also, each of the housing options has a different timer to generate Rupees but that timer will not start until the housing has been constructed and you visit the settlement. For example, the Shanti Ghar has an 8-hour timer to produce 206 Rupees. If you have one set to build (1 hour) but do not come back and visit the settlement until four hours later. The 8-hour timer will not start until you have made that post-construction visit (so lost 3 hours of Rupee-generating timer).

You may have noted on the start screen before launching the Settlement is there are two different chain/connection bonuses for this Settlement. One is the ability to chain Diplomancy buildings together for boosts and another is connecting production (Rupee) buildings to the Embassy. This feature comes in two flavors: 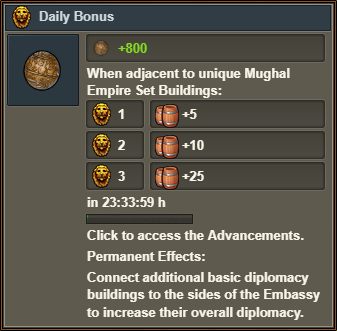 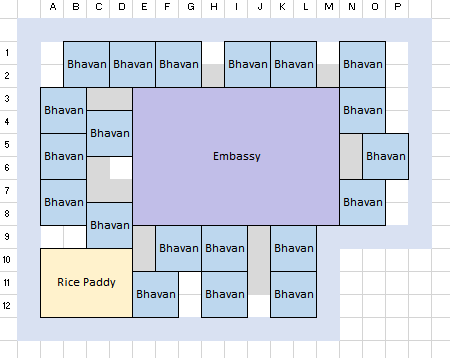 Note: You may opt to puchase the LE's using Basmantis and that is fine as you may have hit the production bonus and have extra Basmantis after unlocking the Chhatri. The rule of thumb is to only purchase LE's until the cost is 15 of a particular Good (i.e., stop after acquiring for 10 Goods). If possible, preference is to purchase with Saree's as only five (5) Saree Goods are required vs 10 Basmantis for the second LE. By producing only Saree's; your chances of hitting the production bonuses increases thus optimizing the potential time spent on gaining real estate. 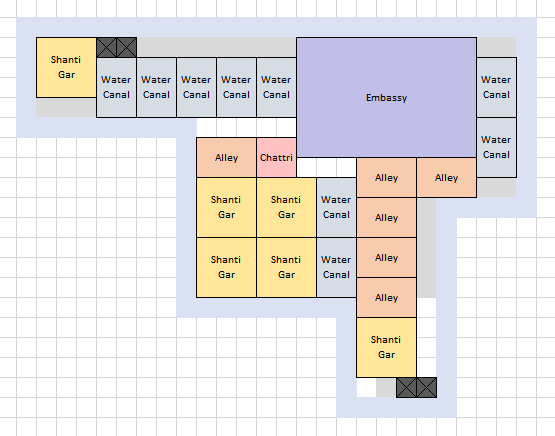