To start the Egypt Settlement, select the transportation ship and you will be brought to the Settlement screen. Choose the Settlement by scrolling up/down on the left to the desired one and select "Start".

Here, you will be cycling between obtaing Loot by fighting which is the settlment Supplies/Currency/Coin in order to set up a Goods producing cycle. This guide assumes you understand the general settlement gist by playing others and will try to provide some pointers unique to this settlement.

The fighting will occur at the Siege Camp where you will be presented with three (3) encounters each day (from easy to hard). The encounter reset time is based on when you unlocked the Siege Camp at the very beginning of the settlement. Note that no combat bonuses from your City will apply in the settlement.

You get the awesome Royal Bathhouse, Emmissaries and depending on how quickly you finish it, fragments for an Ancient Obelisk. As usual, each successful completion will decrease the time alloted for completing the Settlement; however, the Bonus Multiplier will increase and that will hopefully help for successful completion. You can find more information about rewards, Emissaries and time limits here.

Once you have started the settlement, quickly knock out the first few quests by constructing six (6) Clay Huts, a Grain Farm and a Training Camp. Collect your quest rewards for these and then delete the Training Camp (make sure the Siege Camp at the large pyramid is opened first) and add another Grain Farm and Nubian Archer Camp as shown below. 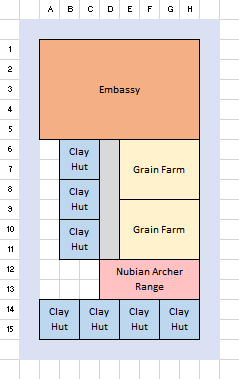 You should be able to easily handle the easy battle with the supplied troops to pass the active quest. I usually load up all five (5) Kopesh Fighters and three (3) Camel Archers. Swing back around later and set your Grain Farms for their first 4-hour productions.

Note: I typically will not do the second fight for that day but that is dependant on the opposition configuration and how many Nubian Archers have been created by the end of the day. Experience will guide as you become more familiar with this settlement.

Keep producing your Grain Farms until you have at least 25 Barley goods. You will spend 6 on two (2) land expansions and 14 on unlocking the Divine Statue tech. Once you place two Divine Statues, you will be rewarded with 25 Barley which will allow you to immediately unlock the Pottery technology.

You can actually unlock the Divine Statues early by planting nine (9) Potted Plants in the open spaces. Unlocking Pottery will require 23 Potted Plants or a combination of these and Divine Statues; when you do decide to do them and the order you spend them is up to you - just don't delete your Grain Farms until you have the minimum needed to prevent having to rebuild them.

The next goal is obtain Multi-Story Clay Houses. Once you have the Pottery Tech unlocked, keep producing Pottery until you have enough to unlock three (3) expansions and the next techs, the Chariot Workshop and Multi-Story Clay Houses. Unlock the expansions while you continue to produce Pottery so you can install a second Nubian Archer camp. At this point, you are done building combat buildings unless you just want to. 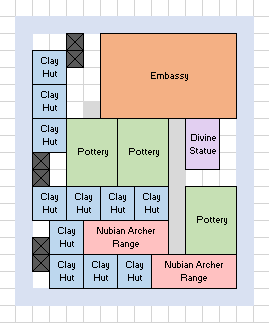 Once you have enough Pottery, you can switch back to producing Barley to unlock the Multi-Story Clay Houses.

Again, experience will guide along with the quantities of Goods needed to get through this stage of the settlement. In some instances, I will continue to produce Barley until I have enough for the first two (2) land expansions and the minimum Barley needed to unlock Multi-Story Clay Houses before switching to producing Pottery.

As an example for the first group of technology unlocks; use the Potted Plants (7 Diplomacy each) to unlock Cultivated Palms. You can then use the Palms (26 Diplomacy) to unlock the Water Garden and Flower Farm. This is optimal as the build times for the Plants and Palms is one (1) minute (be sure to check the quests in between each unlock to build/destroy the ask so you do not accidentally skip something).

In the same manner, you should be able to use Cultivated Palms to unlock both the Decorated Palm Gardens and Residential Block technologies. You will then use Decorated Palms (55 Diplomacy with a 1-hour build time) from there on out until the final Pyramid technology, in which you would want to us as many Oasis' as you can.

Be mindful when unlocking the Procession and Luxury Estate technologies as a group. Quest 18 "Have 1,610 diplomacy" should activate once the Procession has started construction. The approach is your settlement is full of Decorated Palms and you delete just enough to make the space to build a Procession. You satisfy Quest 17 "Have 1 Procession" and you immediately delete the building and place Cultivated Palms (1 minute build time) in the empty space to obtain enough Diplomancy to unlock the Luxury Estate/Oasis technology.